It’s February, 2019, and I’m touring the Miami International Boat Show on a beautiful opening day. The venue is covered in a sea of modern, contemporary designs, more than I’ve ever witnessed in the 32 years I’ve been attending this show. As I’m walking along the docks, over yonder I could see the Chris Craft emblem flying proudly over the company’s display on Virginia Key. For aficionado’s of classic boats, there is something about the Chris Craft brand that get’s your heart beating at a more rapid pace. Now I know that the company has fully embraced the ‘Italian’ or Euro design philosophy, but as I’m making my way over my mind can’t help but wonder what it must have been like for the lucky generation who would find a gleaming white, brand new 47′ Commander in all its glory, proudly on display under that same banner. Thankfully, there exists a loyal following of vintage Chris Craft owners’ that allow those of us in later generations to appreciate the wonderful designs of the past. Kudos to the late Dick Avery, Chris Craft’s designer from ’62 to ’82, for the legacy of endearing design that surpasses time.

I often hear from builders in the industry today that vessels of ‘classic’ design no longer appeal to today’s prospective customer’s, that the people who once appreciated conservative styling are slowing fading away.  However, after reading social media forums recently it is reassuring to learn from a large population of experienced boaters that indeed timeless design remains in vogue.

The 58’ Hatteras LRC is a testimony to functional design that demonstrates a fine balance of form and function, combining attractive lines with the attributes of a true offshore capable vessel, rather than a dock side condo.  The late naval architect Jack Hargrave, who penned some of the most beautiful vessels (many of which are sought after today) that have graced the waterfront, was responsible for designing the yachts that Hatteras manufactured in an era when their vessels were considered the basis from which others were measured.

As a small-craft naval architect, it’s no surprise to those who know me that when I’m in the presence of classic boats my personality seems to change.  Whether in a marina or in the pages of the latest boating publication I can’t disguise the enjoyment I experience when finding myself absorbed by the beauty of a classic boat.  So was the case this past weekend when I had the privilege of touring a 1981
Krogen 42.

A luncheon conversation about boats revealed a common interest in long-range cruising with a new acquaintance of mine – Tom.  Following a pleasant conversation Tom graciously invited me out to see his Krogen, docked behind he and his wife Nancy’s beautiful condo nestled between Florida’s Intracoastal waterway and the Atlantic ocean.

I knew in my mind what the Krogen line was symbolic for and when I caught my first glimpse of Tom’s 42 it was immediately apparent what draw’s so many boater’s to what has become known as the ‘trawler’ – the distinctive sheer line, the sea-kindly displacement hull, and her raised pilot house configuration.

When stepping aboard, you can sense the genuine pride in ownership that Tom felt about his boat.  Most yachtsmen I’ve met are ‘hands-on’ people who enjoy describing the custom touches or improvements they’ve made along the way that make their cruising experience that much more enjoyable.  Tom was no different as he described the added features and various changes made aboard since taking ownership.  “She has a ‘salty’ character about her.”, Tom explained, as he shared some of his cruising stories with me.

While the boating industry has been seemingly taken over by ultra-contemporary styling these days (a revered former employer of mine once described them as ‘Clorox bottles with windows’), it’s truly a breath of fresh air to reacquaint myself with a true classic. From the boats elegant lines, the bronze hardware, it’s polished teak, to its’ cruising-friendly layout, this Krogen 42 brought a smile to this designer’s face.

Alfaro Design has created a new custom hard top for the owner of ‘Berada’, a 98′ MCP motor yacht as part of it’s Yacht Customization Services.   Working in collaboration with Foster’s Yacht Services in Ft. Lauderdale, Fla., the new top features a light, fiberglass composite construction utilizing vacuum infusion to provide strength and stiffness while minimizing weight.  Special attention was given to provide access to existing components mounted to the yacht’s original arch.  Hard tops are a cost effective way to provide a greater level of weather protection than that of a traditional Bimini/canvas installation. Combined with new overhead LED lighting, robust 316 S/S stanchion supports and elegant styling, this new custom addition is a valuable asset and will enhance the level of cruising comfort for ‘Berada’s owner and guests for years to come.  Check out additional photos on the Yacht Customization page of our web site. 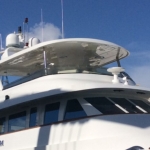 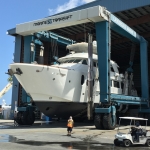 To remain profitable in today’s highly competitive pleasure boat market requires an organization to operate at a consistent level of efficiency and to deliver a repeatable level of high quality.  In order to do so requires a commitment by the company to take action, shift away from the present culture and begin taking steps where measurable improvements in quality and waste reduction can be achieved. The lean process addresses these important issues.

The Toyota motor company first introduced the lean methodology and its resulting success began a period of transformation for many U.S.-based organizations in order to compete in product quality.  Boat building, like the auto industry, has progressively become more competitive over the past few decades, mandating that companies revisit their existing manufacturing paradigms and make adjustments where necessary in design and assembly.

The Fruits of Your Labor

The transition to lean potentially offers a variety of benefits: improved product quality, greater production efficiency, reduced waste, a higher rate of new product introductions, and subsequently higher margins.  It will not occur overnight nor will each facet of lean apply to each and every company but the investment made towards a transformation will progressively improve the manner and the speed in which boats are built and designed.  To your sales teams it will mean remaining competitive and to your customers it will mean a higher level of quality in the ownership experience.